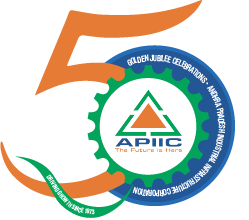 Andhra Pradesh Industrial Infrastructure Corporation Ltd. (APIIC) was incorporated on 26th September, 1973 with Authorised Capital of Rs.20.00 crores and paid up capital of Rs.16.33 crores. APIIC is a wholly owned Undertaking of Government of Andhra Pradesh.

Vested with the objective of providing industrial infrastructure through the development of industrial areas, the Corporation has so far developed more than 300 industrial parks spreading over an extent of about 1,21,655 acres(including allotted area). Besides, the Corporation is also developing sector focussed parks like apparel park/food processing parks/leather parks, Special Economic Zones in the state. The Corporation has also constructed 3500 industrial sheds, 4800 dormitory units, 466 commercial shops.

With the advent of economic liberalization the Corporation has reoriented itself to the changing needs of economy and assumed the role of facilitator. To its credit the Corporation has developed Hi-Tech city with a private promoter. The corporation is the principle facilitator in Mega Projects like Special Economic Zone, Visakha Industrial Water Supply, Gangavaram Port, Convention Centre, Mega Industrial Parks at Parawada , Pashamylaram Financial District Hardware Park at Hyderabad.

No rebate is allowed on the difference amount payable in future.

Revision of Property Tax is happening to capital value system for the years 2021-2022 & 2022-2023 onwards, the balance amount of property tax payable(caused due to revision) shall be collected even after this rebate offer is implemented.